A new Learning City Charter involving the cities from across the island of Ireland of Limerick, Dublin, Cork, and Derry has been signed, symbolising an act of solidarity and peace building at a time of political challenge.

Councillor Eddie Ryan, deputising for the Mayor of the City and County of Limerick, joined counterparts from Cork, Dublin and Derry to jointly sign the Learning City Charter to work together and to support each other through a programme of exchanges between their Learning Cities.

Each of these cities, together with Belfast, is committed to following the UNESCO programme for Learning Cities and has in the past six months formed an all island network to support each other in these efforts.

This charter is in the form of a Memorandum of Understanding (MOU) and is a form of voluntary commitment, signed by the mayors on behalf of their cities.

The timing of this initiative is significant in that it provides for city to city co-operation and links across the island at a time of uncertainty caused by Brexit across the European Union, and by the recent spate of violence in the North, 21 years since the Good Friday Agreement.

We in Limerick see this as an important way to continue the work to implement the UNESCO Beijing Declaration and Guidelines for Building Learning Cities.

It supports us to share best practice with our partner learning cities and to collaborate in our goal of widening access to lifelong learning. Limerick is proud of its recognition in receiving the UNESCO Learning City Award 2017, and continues to build on this work through the Learning Limerick Strategic Plan 2018 – 2022.

Formalising our commitment to the Irish Network and to our close working relationship with our partner cities will help us to continue to share best practice and know-how; and helping to overcome challenges on our journey to build learning cities.

This MOU signing is an important step along the road that we all share, as it brings political support at the highest levels to our shared work to develop our cities as places where all learning, lifelong and lifewide, for all ages, interests and abilities is promoted and celebrated.

I’m delighted to see the establishment of a national network of cities committed to the UNESCO ethos of promoting learning. While there are many cities around the world involved in the wider network, this MOU will strengthen our ties on a more localised level, creating new partnerships and fostering a culture and standard of skills and education that is consistent and appealing to people who wish to study and work closer to home.

The Irish Network has been a great help to us in Dublin and a great way to get advice, to motivate us, and a safe place for us to share the challenges we faced in our first year of being involved and in the running of our first Learning Festival.

The signing which took place in the Dunamaise Arts Centre in Portlaoise, a neutral venue in the centre of the island, was as a symbolic event. All of these cities, with Belfast, as members of the Irish Learning City Network endeavour to create an island of learning, ensuring opportunities for accessible, lifelong learning throughout Ireland. 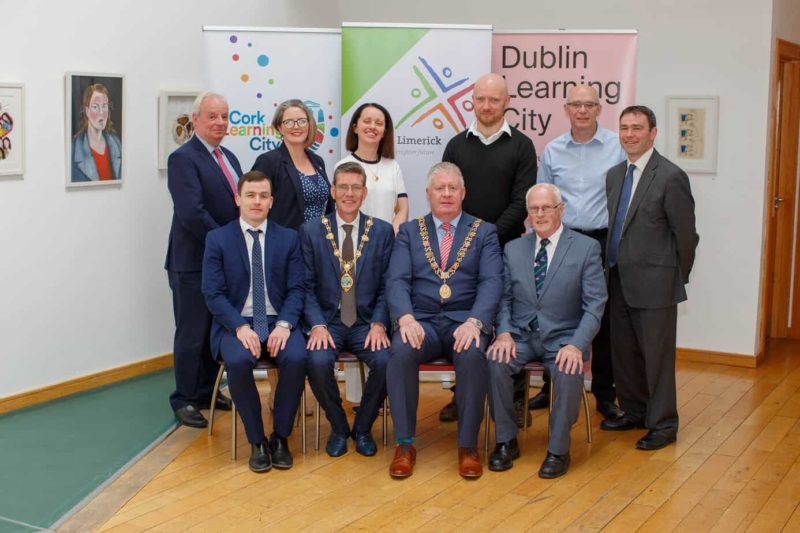 Representatives of Limerick, Cork, Dublin and Derry Learning Cities signing Charter on Learning Cities in Dunamaise Arts Centre, Portlaoise. Picture: Jeff Harvey
Next
We are using cookies to give you the best experience. You can find out more about which cookies we are using or switch them off in privacy settings.
AcceptPrivacy Settings